People today get the idea of how to be a better leader from a variety of venues. These ideas can come from courses, individuals that they look up to, or a leader that they see in the media. With so many influential people populating and in some cases polluting the environment in which good leaders are created, it is easy to forget the fact that the qualities necessary to be a great leader are very simple to grasp. The only thing that is asked of individuals that want to become better leaders is the willingness to learn how to achieve their goal. The drive and the motivation that is required of that individual to go the extra mile to be that leader they have always wanted to be, either for the benefit of themselves or even better, the benefit of the group that they are leading.

Former President John F. Kennedy said it best, “Leadership and learning are indispensable to each other.” A leader is not always born. 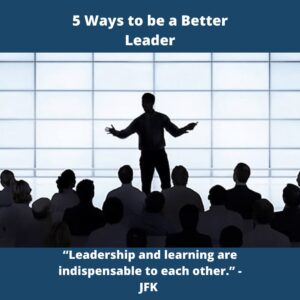 On many occasions it is a learned practice, and the most profound leaders in the world will tell you themselves, that they are still learning every day how to become better leaders. The following will demonstrate 5 of the best ways to become a better leader today in corporate America, and how one can benefit from implementing these basic practices in their groups to become the leader they have always dreamed of becoming.

Being a Humanistic Leader Allows You to Have Flaws:

Being humanistic simply means treating and viewing those individuals that you are leading as a human being. Treating them with respect and integrity, but also seeing things from their perspective. Being a leader with humanistic qualities means that you are supportive, responsive, and communicate well with your team members. There was an instance when I was in a leadership role with my fraternity in college, when being a humanistic leader saved one of my organization’s members from making a mistake that he would regret for the rest of his life. He had a troubled home life, was dealing with pressures from school work, and athletics, and simply was ready to give up on everything that he had going for himself.

I was able to encourage him, and simply be that shoulder to lean on. We created a schedule for him, and got him on the proper path to success. I am proud to say he will be graduating within the next semester, and all that would not have happened had I not been a humanistic leader. Being a humanistic leader both motivates and encourages others around you, and it can create a pretty special work environment for all who are fortunate enough to find a workspace with humanistic leaders.

Taking charge in a leadership role is just as important. Being seen as a strong leader, one who cannot be walked over, yet accepts ideas from others and takes constructive criticism well is so powerful in the team setting. Another instance in which I have experienced the power of taking charge in a leadership role was when my organization was on the verge of being destroyed completely. The basic requirement for running an organization on a college campus was that every semester an active roster needed to be submitted to administration. 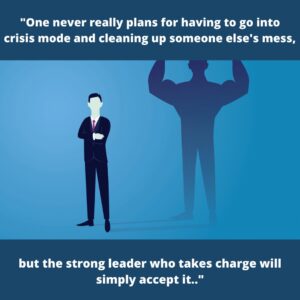 The president at the time had become estranged from the organization, and had forgotten to submit the necessary paperwork, so I was forced to take charge of all operations.One never really plans for having to go into crisis mode and cleaning up someone else’s mess, but the strong leader who takes charge will simply accept it, take it on the chin, and keep moving forward. They set the tone, and new expectations. They get the job done. At the end of the day both the leader and the team will both realize that they are the guiding force behind the entire team. Loyalty is created and that leader will be revered by their team.

Being honest as a leader is one of the most respectable and important qualities that a leader can have. Having full transparency with team members is so important and valued in today’s workplace. It creates a bond, and those members that see the honesty displayed on a daily basis will respect the leader more for telling it how it is. Being honest also means that you do not sugar coat negative situations. Going back to the aforementioned instance in which the president of my organization had become estranged, I as a leader took it upon myself to discuss what went wrong and how we handled the situation so badly.

This person is also my best friend, and no stranger to me being honest with him about his shortcomings, but this time the setting was public, and we had other individuals dependent on us. I did what the leader in me instructed me to do, and explained to him in detail how he fell short. I was empathetic to his situation as well, but the point was to highlight the mistake that had been made in full honesty. He thanked me for it, and has now accepted that he failed the organization and has since been making amends. Being honest in corporate America today is a rare sight to see. But doing so not only will make you a more respected leader, but it will also help those around you know where they stand with you, inform them on how to grow, and prove to be beneficial to everyone.

Creative Leaders are the Innovators:

In today’s workplace, being a creative leader is a necessity! There is no way that a leader can get away with not being creative after the past year we have had. Finding new ways to communicate, facilitate, and motivate your team has been harder than ever during the pandemic, and the creative leader has been the most successful in the past year. During the pandemic my creative side of my leadership skills jumped out at me. It helped me find new ways to engage and recruit a strong group of potential new members into my fraternity, and retain them as well. We were forced to jump through so many hoops simply to keep them engaged, but nevertheless we prevailed, and we have to thank the creative leader in me for making that possible. 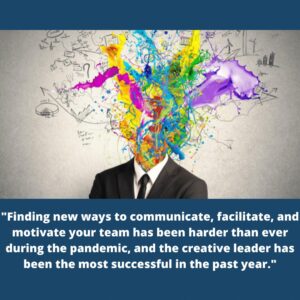 From virtual meetings, to virtual poker/game nights, we kept everyone from potential new members, to active brothers, to alumni, active and engaged in the recruitment process and it turned out to be one of the most successful recruitment semesters we have ever had. In today’s workplace, the use of creativity and being a creative leader can no longer be overlooked. We have to remember that the world is ever changing around us, through new technology, fashions, and mannerisms, and we as strong, creative leaders need to adapt. Not only will the lack of creativity cause you to implode as a leader in the world that we live in today, but the first thing you will see is the drop in morale and the loss of valued employees. So get creative!

Organized Leaders are Productive and Effective:

Being an organized leader will only have its pros in today’s corporate world. The leader who is seen as messy and disorganized will only be remembered for being ineffective by their team. Maintaining a schedule, being on time, and having a neat work environment rubs off on those around you. Creating a comfortable environment for all workers, and ensuring that productivity is always high. I had an instance when I had to face the worst clutter of necessary documents for my organization. I was positive that the binders that held these documents had not been updated since the early 90s. Myself and another administrator in the organization took the time to digitize, reorganize, and clean up the mess that had been made. 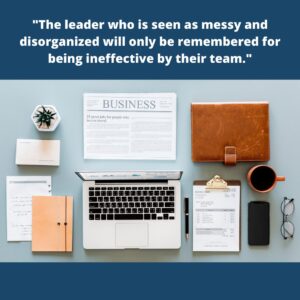 We did this not only for ourselves, but for those that would assume our positions of leadership after we had moved on from being active in the fraternity. It set precedent, and drove those who were active to revitalize other files and records that were important to the organization. Being organized is a top priority for any leader in today’s workplace, because there is really nothing quite like a well oiled machine.

By taking in values such as Being Humanistic, Taking Charge, Being Honest, Being Creative, and Being Organized, growth and becoming a better leader will happen almost effortlessly. The changes that one can make by implementing these values into the workplace, instilling them in those team members around you, and creating a space in which employees want to work, will be visible, and that is the best reward that any leader can ask for. Creating not only personal growth as a leader, but seeing the growth of those around you and how you have played your part in those individuals wanting to become better leaders themselves.

Corporate America no longer needs the leaders of old, the vision for the future is leaders who do not just bark orders and think of themselves as superior, it’s one with leaders who seek personal growth and plant the want of growth in others. The world needs leaders who are not afraid to admit mistakes and wish to make changes for the benefit of themselves and others. Selfish leaders are out, and the better leaders are in.