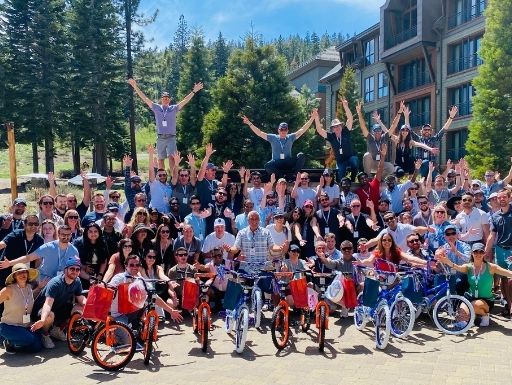 We had a fun time with Databook Labs leading a Build-A-Bike ® team-building activity in a beautiful setting in Lake Tahoe. The group had a lot of fun working together to build bikes for kids in need from the Boys & Girls Clubs of North Lake Tahoe.

Databook is a technology company that helps salespeople collect data on prospective customers more quickly and easily. Their slogan is, “Great salespeople don’t wait for prospects, they find them. And once in touch, the experienced rep knows exactly what to do. But most reps could use some help.”

We had a great time helping this team make their meeting more fun and memorable.

Databook met in Trukee, CA (near Lake Tahoe and Reno, NV) for their first annual meeting post-pandemic. This was the first time that any of the new team members had ever met their coworkers in person. (Many were hired during the shutdown.) The instructor, Chris McNeany started the activity by giving a quick overview. Then, he divided the 110-person group into teams of six to eight people.

Finally, Chris assigned the teams a series of team challenges to solve as a group. As they accomplished each task, they rushed to the front of the room to trade their completed activity for a bicycle piece. After earning the last pieces, the teams cheered as they tightened the last bolt on each bicycle. Then, they donated the completed bikes to the Boys & Girls Club of Lake Tahoe.

Thanks, Databook and the Boys & Girls Club for such a fantastic activity!