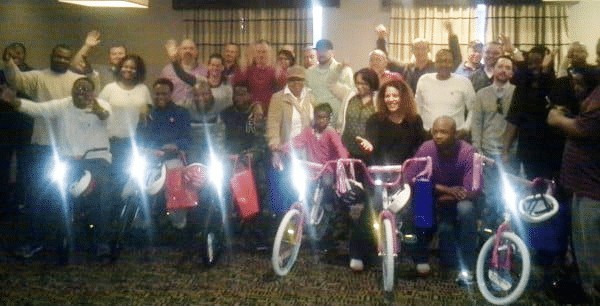 The Home Depot Distribution center for the Southeastern United States was looking for a way to enhance their team network among departments, so they chose the Leaders Institute to do a team building workshop. They wanted the best of both worlds, a fun team event that would also provide some type of learning take away.

Home Depot decided on The Leaders Institute’s ® Build-A-Bike ® event for their annual conference. This is one of the most popular and unique team building events that we offer.

Before the event began, one of the upper management personnel explained that he was trying to get the distribution departments to be more cohesive and communicative. Six teams were formed after a memory exercise amazed the participants how such a simple exercise doing things a little differently can significantly improve performance. The teams were then challenged to create a team name. This is where the fun began as the teams quickly invented a team identity to set themselves apart from the other groups.

Home Deport Takes a Break From Normal Construction to Build Bikes for Kids.

The teams were competing for a 60-second head start in the bike build competition. After the headstart for the winning team ended, the rest of the group jumped int action. They scurried up to the judge’s tables to turn in their answers and were awarded one bike part per correct question. Since the groups would get mixed bike parts, they found that they had to cooperate with other groups to be successful to complete their own bikes.

After the bikes were completed the local Boys and Girls Club of Savannah brought some very happy children to receive the bikes for a charitable donation.

If you want information about how your team can organize a “Build-A-Bike ® for charity” click this link. For a list of all of the fun team building in Georgia, click here.