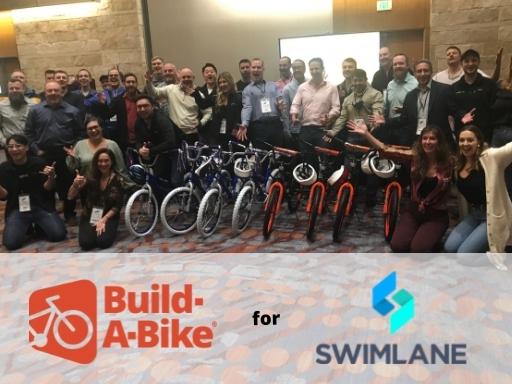 Last week I had the pleasure of hosting a Build-A-Bike ® for Swimlane in Denver, Colorado. Swimlane is a software company that specializes in security orchestration, automation, and response. They invited me to host the Build-A-Bike ® as a closer to their 2022 Sales Kick-Off.

I was greeted at the venue by Kelly and Jim. A big thank you to Jim for helping with the tech setup. After stepping into the meeting room I could tell that this event was going to be fun. The sales executives we all laughing and joking with each other already.

One activity that we do during a Build-A-Bike ® is a team scrambling game called “Have You Ever?”. This was the most interesting Have You Ever game I have seen so far. This game revealed all and showed just how competitive these sales executives were. In this game, the participants must walk around in a circle. Most times I have to encourage the participants to put some pep in their step but Swimlane started off with a sprint. It was pretty chaotic at first so we had to go over the rules again but I loved the spirit.

Speaking of how competitive they were, they showed out during the bike-building activity. One thing I remember from this part distinctly is how they acted when I passed out the clue packets. When we reach the bike building part of the event, I tell the groups to send up their team captains to me to take their clue packets and start working. I like to give them to the count of three so it’s fair. This time when I started to count, all of the captains had snathed their packets from my assistant’s hand by the count of two. Even though they didn’t follow instructions well, it was pretty hilarious. I appreciated the drive.

Once all the bikes were assembled, the assistant director at Boys & Girls Club Metro Denver: Beach Court, Rachel, came to accept the donation. She mentioned how the bikes were such a great gift for their club kids because developing healthy lifestyles is one of their main goals. She told us that since covid, they have seen kids having a lot more “tech time”. These bikes are going to help them get outside and active.

Thank you Swimlane for being a fun group and making such a meaningful donation.