Step one in becoming an effective leader is building trust within your team. Keep in mind, that you can’t really make anyone do anything. However, you can create an atmosphere within your organization where growth and success are normal. In this session, we will cover how to build trust in a team. This is part one of a four-part series on becoming an effective leader. In each of the sessions, we will cover one of the component steps to creating a team culture.

Four-Step Process to Build a Culture of Teamwork in Your Organization.

The four-step leadership development process is as follows.

Each of these steps is progressive. For instance, if we don’t have solid trust with our team, we will likely have more conflicts. If we are in conflict with our team members, it will be difficult to gain cooperation. The point is that the better we do in the early stages, the easier it is to have success in the latter stages. In this session, we will focus on Step #1: How to Build Trust in a Team.

Build Trust and Rapport with the People that You Want to Lead.

Think about the relationships that you have with others as being a checking account. Each person that you interact with has an entirely different account. When we have positive interactions with a person, we make deposits into that account. However, when something negative occurs or there is a conflict, a withdrawal is made. So, if you want to build trust in a team, you as the leader have to make a tremendous number of deposits into the accounts of each team member.

Below are seven key ways to build trust within a team. We suggest that you spend a week focusing on a single principle every day. Don’t go to bed each day before you apply the principle for that day. By the end of the week, you should already begin to see significant changes in the rapport that you have with others.

The first step in building trust is to reduce the amount of criticism that you deliver to others.

I have to admit. By nature, I’m an incredibly critical person. As a result, I have to be extremely careful when I coach people. In my head, I might just be offering a friendly suggestion to a coworker. However, when he or she hears the suggestion, it sounds quite different to him or her. I have an overly-aggressive personality, so my results are a little extreme. When people feel like they are being criticized, they often take it personally. They will also become defensive. 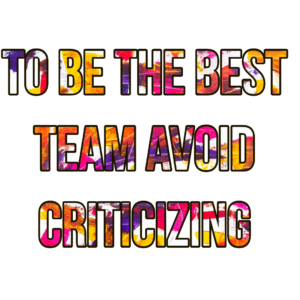 Even if you are the nicest, sweetest person on Earth, when you criticize someone, it will build resentment. Maybe just a little, but criticism is like mosquito bites. A single bite is annoying. When you get bitten over and over, though, you will become miserable. In some cases, these bites can lead to malaria. Criticism is the same way. One critical remark is annoying. Multiple critical remarks can permanently harm the relationship. Finally, if the remarks continue, the culture of your organization can be negatively affected.

So if you want to build trust in a team, avoid criticizing.

Look at Things from the Other Person’s Point of View.

When we communicate with family and coworkers, we want to be heard and to be understood. Guess what? The person who we are communicating with wants the same thing. So, if you want to build trust in a team, focus on looking at things from the other person’s perspective. We put this principle in the “building trust” group, but it’s actually a good conflict resolution principle too.

A few weeks ago, we got a phone call from an upset customer. He had ordered a self-facilitated program from us. We shipped him the materials from our warehouse, but he was also supposed to get a leader guide via email. There was a glitch in the auto email system, so he didn’t get it. When he received his box of materials, the guide wasn’t in the box. He called us in a panic. The caller was so upset, that the office forwarded him to my extension.

When someone is aggressive to me, my natural reaction is to respond in kind. In this situation, though, I tried to look at the situation from his point of view. He had no idea that the leader guide was digital and could be sent to him in less than a second. From his perspective, he had paid money for a product that was incomplete. By putting myself in his shoes, I was able to empathize with his situation. I quickly apologized and fixed the situation for him.

So, the second way to build trust in a team is to look at things from the other person’s point of view.

The Easiest Way to Build Trust in a Team Is to Smile More. (It Makes You More Approachable and Friendly.)

This one really doesn’t take a lot of effort, but it is really important. Smiles are contagious. So are frowns, by the way. If you walk around your office with a scowl on your face, your team will reciprocate. However, if you walk around the office and smile, they will also reciprocate. The first way, though, everyone is miserable. The second way, you spread happiness to your team.

Coca-Cola made a commercial where they had an actor walk into the subway car with a neutral expression. Then, shortly after the doors closed, he smiled at something that was on his tablet. Next, he started laughing. By the time the car stopped at the next stop, the whole subway car was smiling and most were laughing together. A few of the people in the car began to pass out Coke’s along with a card that said, “Happiness begins with a smile.”

The easiest way to build rapport with your team is to smile more.

Make an Effort to Remember Names.

In the book How to Win Friends and Influence People, Dale Carnegie said, “A person’s name is, to that person, the sweetest most important sound in any language. Moms know this to be true. If she really wants to get the attention of a child who is ignoring her, she calls the child by name.

For me, if it was a friendly call, my mom used, “Doug.” If I happened to not respond right away, it changed to “Douglas.” On those all-too-frequent occasions where I was in trouble, I got the dreaded, “Douglas Michael!” Okay, maybe that is not the best example to show how using a person’s name builds rapport.

If you want to test this principle, go to a coworker who is busy doing something. Pause and call the person by name. Within a split second, the person will likely look up and smile at you. At that moment, you are in rapport with that coworker.

So the fourth way to build trust in your team is to remember and use their names in conversations.

Avoid Placing the Burdens of Your Problems onto Your Team’s Shoulders.

The easiest way to diminish trust is to dump on your coworkers. I’m not saying to avoid asking for help if you need it. What I’m saying is, don’t create problems from procrastination or lack of thoroughness, and then ask your coworkers to bail you out.

I’d like to tell you that this example happened to me years ago before I knew better. But, it happened a couple of months ago. I was teaching a class in Washington DC on a Monday and flying to Atlanta on Tuesday to teach again. The class in DC finished a little early, so I was relaxing in the Admiral’s Club at Reagan airport. When I looked at my notes, though, I felt like I was going to lose my lunch. The client in Atlanta had hired me to create a custom workshop. I had inadvertently wrote it into my schedule using the name of one of our pre-designed courses.

I had less than four hours to design an entire workshop, create a manual, and get the manual printed, so it could be overnight shipped to Atlanta. This whole fiasco was entirely my fault. I had to meekly call my office and ask for help. Almost the entire staff had to stop what they were doing to fix the problem that I had created. Luckily, I have a fantastic team who had my manuals waiting for me at my hotel by 8 AM the next morning. (They are miracle workers.)

If something like this happens once, it might build some camaraderie and teamwork. However, if it happens over and over again, it will diminish the trust and rapport of the team dramatically.

Build Trust in a Team by Taking Responsibility for Clear Communication.

We all like to think that we communicate clearly. Good leaders, though, take responsibility to make sure the communication has occurred. This is more than speaking clearly and listening well. It is knowing your team members and understanding how they speak and listen as well. For instance, if you speak very clearly but are speaking to a poor listener, did the communication occur? A good leader knows the strengths and weaknesses of all the players.

When my son, Ben was in 4th grade, he played first base in Little League. He has pretty good hand-eye coordination, so his coach told him not to let any ball get past him. For the first few games, he caught every ball. The coach was enthused. Then, a poor throw from the shortstop pulled him off the base. The runner was safe. The coach, trying to give instruction, told Ben, “Make sure to keep your foot on the bag.” Ben missed the next 12 throws to him. I was watching in the stands, and I was just as confused as the coach.

In the car on the way home, I asked Ben what the coach told him. When he answered me, I started laughing. The coach thought that clear communication had occurred. Early in the season, he told Ben to “not let anything past him.” That request was replaced by, “Keep your foot on the bag.” I learned a valuable lesson about communicating with my son, that day. I know that if I want to ensure clear communication, focus on the result, not the task. “We have to get them out,” would have worked better.

Sometimes what is very clear to the speaker can easily be misinterpreted by the listener.

This final tip is so big, that I want to go into a little more depth. So, I will do a follow-up post just on this topic. The main concept, though, is to take the time to make sure that you are listening to your team. Each member of your team has specific challenges. They also have great ideas. If you are doing all of the talking, you will likely never hear any of them.

The next time one of your team members comes to you with a problem, don’t interrupt and offer a solution. Respond with this question, “What do you think we should do?” You will be surprised at how often the team member’s idea is actually better than your own.