This is part two of a four-part series of leadership principles that can be used in an office environment. Last week we covered how to build trust and a team culture within your group. The focus of this session is on conflict resolution strategies and dealing with difficult people. Remember that these principles are cumulative. The strategies to resolve conflicts work much better if an environment of teamwork is already present. If you find that your team is experiencing a high level of conflict, back up and work on building the level of trust.

Resolve Conflicts and Create an Environment Where Disagreements Do Not Cause Personal Conflicts.

Conflicts are inevitable. However, the more we know about human nature, the better we will be at resolving these conflicts. In addition, when we understand human nature, we have a better chance of achieving a positive outcome for both parties. We know that different people have different priorities and different styles in dealing with others. In general, though, human beings have certain characteristics that are very similar. These similarities are true across gender, racial, and socio-economic lines as well. For instance, in general, the following statements are almost always true:

These statements are true among the entire human race. So, when we disagree with people, we are likely to raise resentment. As a result, it might be a good idea to strengthen our soft-skills – our people skills – when dealing with conflicts. If we find ourselves in a tense situation, and we raise our voice, the other party is likely to respond in kind. This will usually escalate the situation quickly. Understanding this human nature is one of the first and most important steps in anger management.

By the way, this is why we started this series with the 7 Ways to Build Trust with Your Team post. The more that we work on the prior principles, the easier it will be to use these current principles.

The first three principles are ways to avoid conflict before the disagreement even occurs. Numbers four through six help you resolve conflicts. Finally, the last principle is there to help make sure that the conflict doesn’t return. Let’s cover each principle in a little more detail.

1) Be proactive instead of reactive.

The most important conflict resolution strategy is to anticipate potential conflicts and plan accordingly. When a change is made within your organization or a new idea is floated to the team, ask these questions. “Who on the team is likely to disagree with this idea?” “Is this idea going to cause disagreements?” These answers to these questions will allow you to not be blindsided by a conflict.

Most often, when the conflict comes out of the blue, we will often respond in anger. Remember, we are humans too. So, we also hate it when others disagree with us. If you haven’t anticipated the disagreement, you will have a propensity to overreact.

2) Be slow to anger-especially over petty issues.

Anger is always more harmful than the insult that caused it. — Chinese Proverb

At the heart of almost every disagreement is anger. The worst part about anger entering the conversation is that anger will often escalate the conflict. One person, right or wrong, gets angry at the other. Then, not wanting to be outdone, the second person gets angry as well. However, going back to human nature, when the second person responds in anger, the disagreement often escalates. 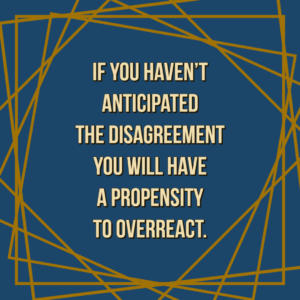 I remember in Elementary School PE class, the coach had us compete in a tug-of-war. An equal number of kids were on each team. I was small at the time, so, I was at the top of our team’s line. We had our biggest kid at the back as our “anchor.” When the coach said, “Go!” we all started tugging. Our whole team slowly started moving forward (not backward like we had hoped). Eventually, we dug in our heels, pulled harder, and stopped the other team’s progress. The other team slowly started moving our way. After a few seconds, the other team dug in their heels, pulled even harder, and pulling us to them.

This back-and-forth occurred over and over again. Each time one of the teams surged, it was more difficult to stop the surge. The effort that we used the last time was exponentially greater than the first. Anger in a conflict works in a similar way. As each side responds to the other, the anger increases.

So one of the best conflict resolution strategies is to be slow to anger.

3) Instead of telling people they are wrong, point out mistakes indirectly.

A person convinced against his will is of the same opinion still. — Samuel Butler

For instance, let’s say that you have a team member who has turned in his report after a deadline. A poor leader will ask, “Why did you turn your report in late?” (The person will likely hear an unsaid addition to this question. That addition is … “You idiot.”) Instead, let the person save face. “I know you were pressed for time on your report last week. Were you able to get it in before the deadline?”

This strategy for resolving conflicts doesn’t work all the time. However, in many cases, it can help someone who has made a mistake be less likely to repeat the mistake in the future.

4) Look for some type of common ground as soon as possible.

A compromise is the art of dividing a cake in such a way that everyone believes he has the biggest piece. — Ludwig Erhard

Remember that people dislike others who disagree with them. So, when you are in a conflict, look for some common ground as soon as possible. Good mediators use this technique quite often. When two parties are in a legal dispute, the mediator will have each party secluded to a private room. Each will receive a legal pad. The judge will ask each party to write out on the pad every possible thing that they would want from the dispute. After receiving both pads, the mediator will just look for anything, no matter how small, that is on both pads.

Once the ice is broken, the parties are more likely to agree on additional items.

5) If you find that you are in the wrong, admit it.

It’s easier to eat crow while it is still warm. — Dan Heist

When a poor leader realizes that he or she is wrong, they will try to cover up the mistake. Good leaders, though, know that to be successful, we will often be more wrong than we are right.

Do you realize that if you were right just 51% of the time, you’d be a gazillionaire? The reason that I am more successful, financially than a lot of other folks that do what I do is that I have made more mistakes than them. I try something, it doesn’t work, so I try something else. Once I make a mistake, I now know what NOT to do.

You’d be amazed at how often a disagreement can be ended quickly by just apologizing to the person who was wronged. It is really hard to keep fighting with someone who just admitted that you were right and he was wrong.

6) Admit one of your own poor decisions before pointing out a similar error by others.

A man should never be ashamed to own he has been in the wrong, which is but saying… that he is wiser today than he was yesterday. — Alexander Pope, from Miscellanies by Jonathan Swift

This tip is a great way to call attention to the mistake indirectly. Before pointing out the mistake, give the person an example of a time that you made a similar mistake.

When I was six, I went into my dad’s bedroom and stole a dollar from him. There was a store at the end of our road that had candy and soft drinks. I figured that I could run down to the store and get some treats for myself and my little brother. Of course, my dad caught me. I was terrified because I knew that I had disappointed him.

My dad sat me down on his bed, though, and told me about a time when he was in the Army. He and his buddy had a weekend pass to go into town. The base allowed the soldiers to use their Jeeps to travel off base as long as they returned them with a full tank of gas. However, since my dad’s buddy worked at the motor pool, they decided to fill up the tank when they returned. As they were topping off the tank, the military police pulled and asked them what they were doing. My dad told me that they took him into custody for stealing from the US government. He said that, if he hadn’t had an understanding commanding officer, he could have been put away in Federal prison for up to 20 years.

I got the point.

Never does the human soul appear so strong as when it forgoes revenge and dares forgive an injury. — E.H. Chapin

Once the conflict is over, you really want to mend fences with the other person. Some people get over conflicts very quickly. Others tend to hold onto the anger. Neither of these groups is correct or incorrect. They are just different. The important thing to remember is that the other person may deal with disagreements differently than you do. So, don’t hold that against them.

For the next lesson in this series, view “7 Ways to Gain Cooperation Your New Team.“. If you think that these strategies would be helpful for your team, then our leadership program may be a good fit.
The program goes through the process in a step-by-step way.

The best way to come out of these situations in a positive way is to go back begin building the trust level again.