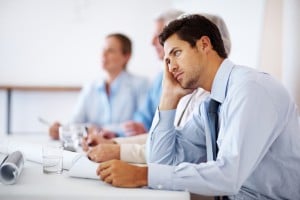 How would you describe meetings you have attended in the past? Better yet… How would your team describe your meetings? Over the past 20 years, I have asked that question to over 1200 audience. Here are the most popular answers.

The Most Popular Responses to “How Would You Describe Your Meetings?

Those two responses almost always come up when I ask the question. Other answers include:

Every once in a while, I get a response like positive, informative, or necessary. However, usually the other participants gang-up against the person very quickly.

When People Are In Meetings, No Work Is Being Produced.

Most people believe that business meetings are necessary evils, and in many cases, they are. But one of the most important things we can remember about business meetings is to NOT have one unless it is absolutely necessary. When your employees and coworkers are in staff meetings, they are not producing. Nothing is ever produced until after the meeting is over. My first advice to people who want to make meetings more effective is to have fewer of them.

Years ago, I made this statement in a class, and a young lady in the front row raised her hand. “That sounds really good, but what happens if your job is to go to meetings?”

I was intrigued, so I asked her to tell me more. She was a personal assistant to a manager of a Fortune 500 company. Her boss hired her to attend the meetings for him. Apparently, he was being asked to attend so many meetings that he had no time to get his job done. So, he hired her to go instead.

After class, she and I sat down and went over her schedule for the previous week. We identified 32-hours of wasted meeting time. These were meetings that neither she nor her boss actually needed to attend. He was not involved in any of the decision-making processes, and he was not responsible for the results of the teams. Both of them stopped going. Three weeks later, I asked her what happened. She said, “Nothing. I’m not sure anyone even noticed.”

Granted, this is an extreme case, but there are probably hours in each of our weeks that are wasted by ineffective meetings.

The tips below are strategies that I have collected over the years from class members who swear by their effectiveness. I hope they work for you as well.

If you would like the meeting to be more collaborative, ask a few team members to prepare a short report.

For instance, one of my instructors recently taught a virtual team building activity. I happened to be at the office, and my phone suddenly flashed a notification, “Amy Maybury is Live.” She had started a Facebook live broadcast while she was actually teaching the activity. The people in the event were having a blast and were playing along by letting her interview them. It was really cute and great marketing to boot.

So, after she wrapped up the event, I reached out to her. I asked if she might be willing to let the other instructors know what she had done and how she got such cooperation from the group. She enthusiastically agreed, so I added it to my agenda for the next team meeting.

This sounds very elementary, but you’d be surprised by the number of people who take the time to create an agenda and then totally disregard the agenda during the meeting.

Treat your agenda like the map app on your phone. If you make a wrong turn in your car, your app will give you a route to get back on track. Your agenda can do this for your meetings.

Ask yourself, “What are the three most important things we need to cover in the meeting?” Limit the agenda to these three points. The rest of the things you wanted to cover, by definition, weren’t really that important anyway, so why waste everyone’s time?

I got invited to a Rotary Club meeting a few weeks ago just before the November election. This was an evening meeting, and a student organization had brought pizza to sell as a fundraiser. Yup, I’m all about helping the kids, so I totally did my part. Seriously, though, I really was happy to come support the community and network with a few community leaders. However, the president of the club had a list of items to cover. The list was pretty long. After the third one, I pretty much checked out.

After about 20 minutes of rambling from one point to the next, he started introducing the politicians in the room. Each one got to stand up and thank the crowd for their support. (There were about six of them.) The combination of the long list of items and the long list of politicians was too much. Many of us in the audience were squirming in our seats.

If you want your team to get more out of your meetings, focus on just a few key items per meeting.

When the time limit is up, end the meeting.

You may not get to cover every single thing that you wanted to cover the first couple of times you try this. Within a short time, though, you will find that the major information points are being discussed quickly. You will also find that decisions are being made very efficiently as well.

Instead of going around the table and asking for opinions or input, just ask a question. Then, let people volunteer their answers. There will be times during any meeting that each person will “zone out.” (This will happen more often in a looooong and BOW-ring meeting.) So, if you happen to call on someone who has zoned out, you will embarrass them. In addition, if we call on every person, it wastes time and puts people on the spot.

Instead, you might just ask a question of the group as a whole. Pause, then wait until someone answers. Then, say something like, “Good, let’s hear from someone else.” This will encourage others to jump in. The goal is to get everyone to speak without putting anyone on the spot.

If there are people in your meeting who rarely speak, avoid calling on them directly. This will just make them more nervous. You might say something like, “I value the opinion of each of you, does anyone else have something to add?” Then, just look at the person you want to hear from. If he or she has something to say, he or she will say it if encouraged in this way. If he or she doesn’t, then you haven’t embarrassed the person.

Want your meetings to be more powerful, take a look at our “More Efficient Meetings” workshop. It can be conducted both in-person or virtually.

Meeings Can Be Powerful If They Are Efficient.

Meetings can be a very powerful way to communicate and solve problems. Just remember to avoid calling a meeting if you really don’t need to. Create an agenda and stick to it. Set a time limit. And finally, encourage the group to collaborate, but don’t try to force them. Your meetings can be that efficient and that powerful tool if you use these simple tips.