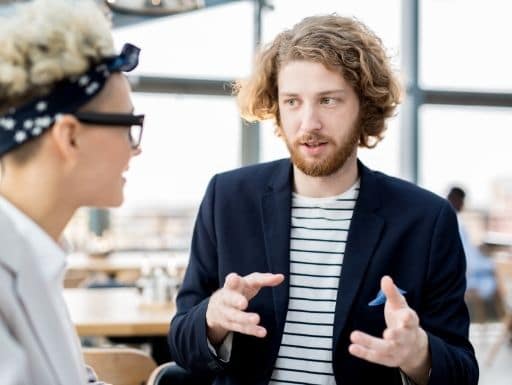 One of the primary desires of human beings is to be understood and esteemed by others.  We want people to see things from our point of view.  Sometimes we want this so badly, that we disagree with and argue with points of view that are also valid.

A business owner I know hired a young man who, in his first year, broke all of the sales records for the company.  This young man had fantastic ideas that would revolutionize the way the company sold its services.  The owner was very cautious about implementing these ideas, though.  He had spent years building his company and was very careful about making changes.

The salesman debated and eventually argued with his boss, and the boss, after being backed into a corner, argued back.  Neither had the courage or the foresight to take a step back and try to see things from the other person’s point of view.

The frustrated salesman finally gave up a promising career and quit.  The boss lost a great salesperson because neither took the time to understand the other.

This very thing happens day after day in businesses and families around the world.  Human nature is that we always believe that we are right.  Guess what?  The other guy thinks the same thing.  So, if you dig your heels in, he will dig in his heels as well.  All that we have to do is take a step back and say, “Why is this person thinking the way that he is thinking?  Why is he acting the way that he is acting?”

That little moment of clarity can add a tremendous amount of understanding on our part and will help us build rapport with the other person very quickly.  We don’t necessarily have to agree with the person. But just looking at things from the other person’s point of view is a big step forward.

If we want people to like and respect us, do the opposite of what comes naturally. See things from other’s point of view.  When we understand others, we are much more likely to be understood by them.

Principle #2: Look at Things from the Other Person’s Point of View