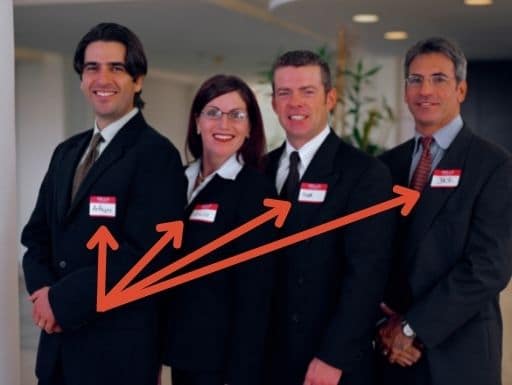 Have you ever been in one of those situations where you run into someone that you have met before and can’t remember that person’s name?  It can be an awkward situation for both you and the other person.

When we remember someone’s name, we’re telling him, “You’re important.”  Therefore, when we forget a person’s name, we may leave the opposite impression.

Do you want great service at a restaurant?  Call the waitress by name when you place your order.

Want to be the center of influence at a party?

Introduce people you just met to others at the party.

People love to hear their own name.  In fact, Dale Carnegie said that “a person’s name is to that person, the sweetest most important sound in any language.”

A Simple Way to Remember Names.

One of the first things we teach in our High Impact Leaders course is a simple way to remember names.  (Follow the link to discover how!)

It is a technique that is so simple that many people in a class of 25 will be able to recall the first and last names of every single person in the classroom within the first hour of class.

In 1988, Harvey Mackay wrote a book called Swim with the Sharks without Being Eaten Alive, and he wanted to get it published.  When he found a publisher that would talk to him, he had the audacity to request that the first edition print 100,000 copies.

The publisher thought that Mackay was nuts.  No publisher would print that many copies of a book written by a first-time author.  Then Mackay pulled out his Rolodex and showed the publisher how he knew over 6,500 people on a first-name basis, and he consciously kept in contact with each one.

The publisher took a chance and ended up selling over 300,000 copies of the first book.

Harvey Mackay used his ability to remember people – remember their names to build his million-dollar company. Then, he used the same relationships to build his writing and speaking career.

You can do the same thing.  If you want to be a good people person, focus on remembering names.  They will feel more important because you remembered, and they will think more of you as well.