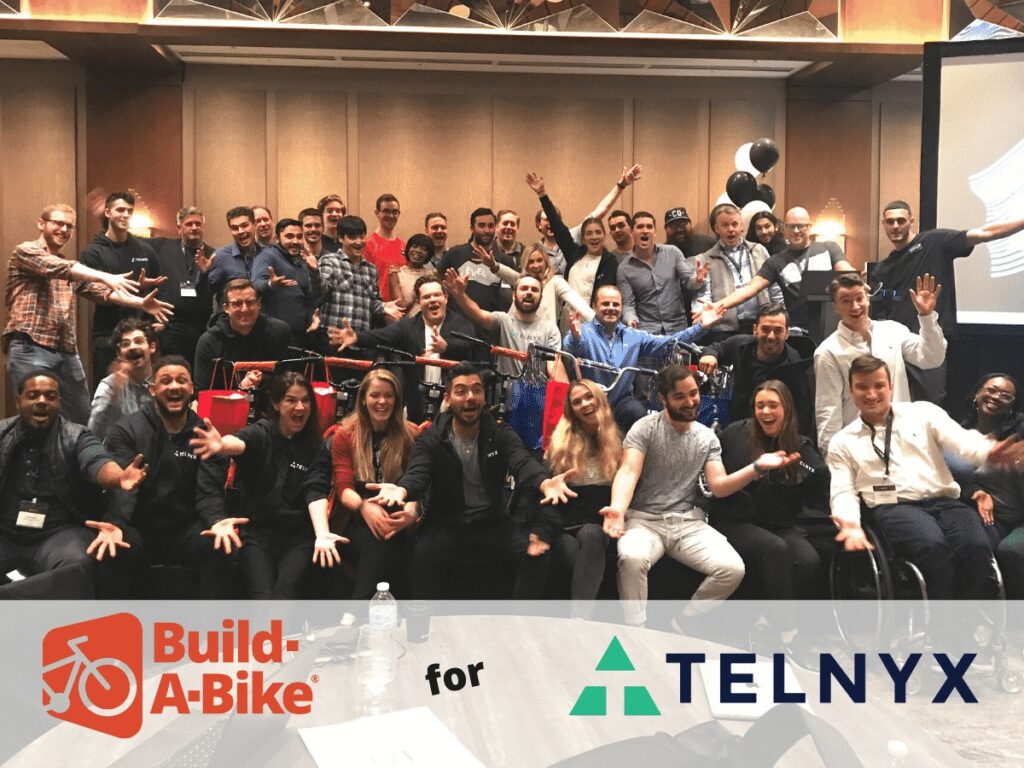 Okay, the title above is a little tongue-in-cheek. Telnyx is a communication company that helps its clients consolidate voice calls, texting apps, video meetings, and other online communication platforms. They basically take a mess of different communication methods and platforms and redesign them into a single cohesive platform. So, when they asked us to design a fun team building activity for their sales team, we couldn’t resist poking a little fun at the communication double meaning.

The sales team met in downtown Austin near the University of Texas campus for a multi-day meeting. The Build-A-Bike ® activity was the capstone of the meeting. They started the morning with another speaker. (I was to start the team building activity at 10:30 AM.) However, as usual, I arrived much earlier than I needed to be there. And some evil person in the group decided it would be a good idea to bring Voodoo Donuts for the group. (Just joking. Whoever brought them, you are a very nice person. However, Voodoo Donuts are NOT on my diet.) I think I gained five pounds waiting for my turn to speak. (But it was worth it!)

The Sales Team Had a Blast Building Bikes for Boys & Girls Club in Austin.

Knowing that this group was really competitive, the first activity we had them do was a “contest.” We divided them into teams and told them that the winner of the “contest” would receive a headstart on the Build-A-Bike ® activity. Of course, the winning team was excited when they got the headstart. However, it wasn’t until a few minutes later that they realized the activity wasn’t a competition at all. All of the groups had to work together to earn their bicycles.

The activity was a metaphor for what happens in real life. As companies grow, divisions, locations, and departments tend to become compartmentalized. For instance, the sales team competes with the marketing team for budget and resources. The technical team will sometimes see the sales team as being obstacles not assets. However, when the group opens lines of communication and works together as a single cohesive team, they accomplish a lot more — and faster!

Once the group realized this, the solutions to the team challenges came very quickly. High-fives and pats on the back occurred all over the room. Then, as the last bike was completed, Monica from the local Boys & Girls Club came on stage to accept the bikes on behalf of her kids.

Thanks so much to Telnyx and the Boys & Girls Club in Austin for helping us build a stronger team and a strong community!