Back to Team Building Exercises | Fun Corporate Team Building Events (No Charity Donation) | I’m In It to Win It Team Game Show.
Benjamin Dewar, “The instructor was great and so was the event!”
Get a Price Quote

I’m In It to Win It is, by far the most fun and interactive game show team building activity on the planet. Every team member competes for points in this gameshow that was made to build stronger teams.

I’m in It to Win It is our take on the 60-second activity game show “Minute To Win It” played with household items. However, we have our own spin that makes this a fun and interactive way to build teamwork. Whereas the TV game show is about a single contestant trying to accomplish challenges in a minute, this activity organizes your group into small teams who compete for points.

Each Team Member Competes in a Series of Game Show Team Activities. 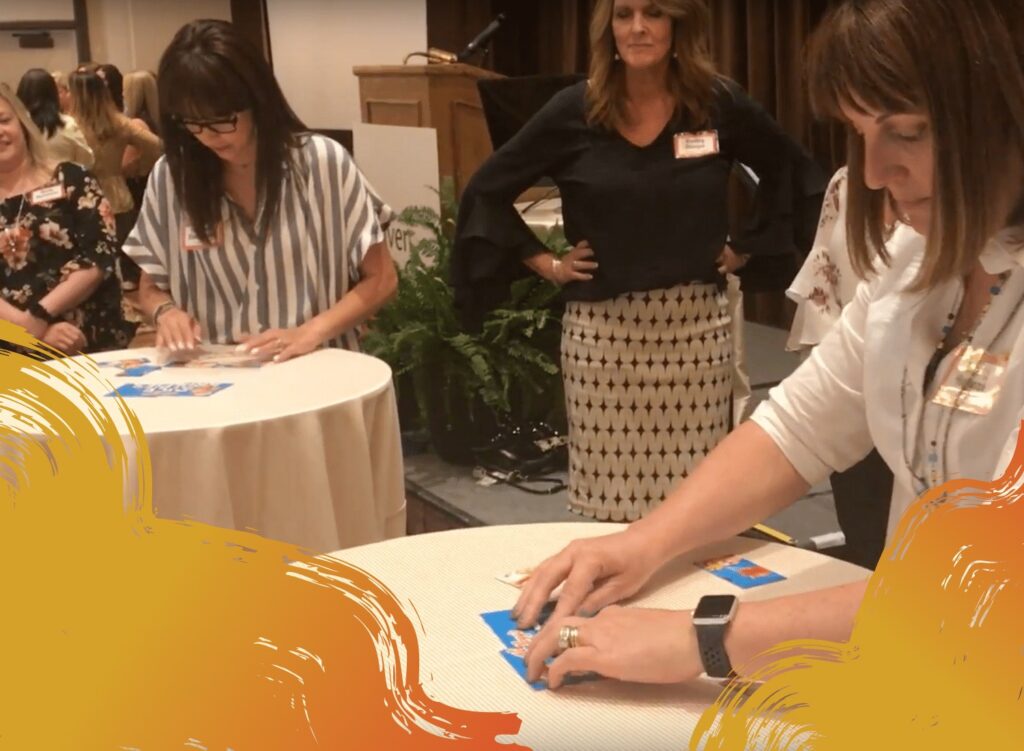 One of the most important parts of a good team building program is being able to get the whole team to participate and add something to the group. Most TV game shows are not ideal for large groups or corporate events. (Only three people get to play at one time.) However, this team building event does both! Every participant gets to play unique games to earn points for their teammates!

If you have ever seen the NBC Show, “Minute to Win It,” the single contestant will attempt a series of interactive games that must be completed in under one minute. If the person wins the game, he/she moves on to a more difficult game. Each step along the way, the person accumulates additional prize money. The games from the program are really fun and take a little practice to master. However, they don’t really lend themselves to better teamwork… Until now!

The entire event contains just six games. And each team has a maximum of six team mates. Each team captain will pick one player from their group to compete against other teams in individual play. Each person gets a game show experience and feels the power of play as point value increases! At the end, a champion is crowned.

Corporate groups have a great time playing each new game (no matter what the group size!) In fact, larger groups are also more cost-effective!

Your professional game show host will make your next event an amazing event!

The entire event contains just six games. And each team has a maximum of six team mates. Each team captain will pick one player from their group to compete against other teams in individual play. All players get a game show experience and feel the power of play as point value increases! In the end, a champion is crowned.

Want to Add a Charity Donation?

So, What Happens When a Team Wins the Game Show Activities?

When one of your teams solves wins the most points, you have a couple of options. First, the team can receive “bragging rights” and a nice round of applause. Another option is to include gift certificates for the winning team. The third option is to make a charity donation in the winning team’s name.

So, the conclusion is really up to you, the organizer.

This is a very cost-effective way to conduct a corporate social responsibility event or service project. Your team will laugh, learn to problem solve, and do something nice for a good cause.

You can choose any charity for the donation. You can also choose any donation amount. Here are a few organizations, though, who really appreciate cash donations. St. Jude |Disabled American Veterans | ASPCA.

Or Add Some Classroom Sessions.

Turn Your Gameshow into a Half-Day Workshop or Full-Day Seminar.

You can easily add modules from our Creating a Team Culture program to increase the value of the time spent with your group!

We organize this content in one-hour (to 1.5 hour) modules. So, we can customize the additional sessions to the specific needs of your team. Add just a single module to make this customizable game show into a half-day training session. Or, add four modules to create a custom day of team development!

Here are a few sample modules:

Your instructor can help you customize the content based on the needs of your group. Or, you could start with an Assessment Workshop to pinpoint the specific areas of training that will give your group the most value.

For Additional Information, to Get a Price Quote, or Schedule a Program, Complete the Form Below.

Here Are a Few Other Corporate Team Building Activities.