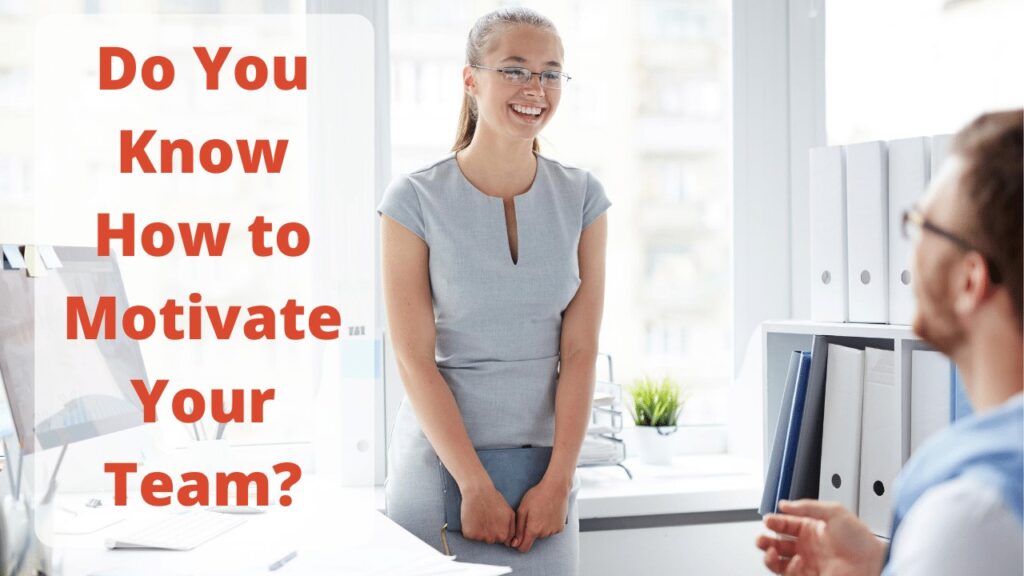 Leadership and management skills are not coded into our DNA. These skills are honed over time through study, research, experimentation, and sometimes… trial and error. One of the things that can be challenging for managers and leaders, even during optimal times, is motivating your team. When a crisis is going on, though, the difficulty of keeping your team motivated increases dramatically.

Ask any manager what motivates workers and he or she will often create a list that is topped by “recognition of good work.”  Sure that makes sense.  We all love praise.  But have you talked to your team about what truly motivates them?  Their answers may be very surprising, and certainly enlightening.

A few years back, a couple of writers from Harvard Business Review conducted an extensive study about this subject. The results were revolutionary and changed the way that we see managers and leaders. The researchers had hundreds of employees complete journal entry at the end of each workday. In this entry, they were asked to judge at the end of each day whether it was a “Good Day” at work or a “Bad Day.”

The results were quite surprising.

The Major Component of a “Good Day” at Work Was Progress Made in Meaningful Work.

I’ve been a leadership coach for over 25 years. When I started coaching high-level leaders and managers 25 years ago, my main coaching style was to focus these leaders on improving people-skills. The reason was simple, people who work for you will always do a better job if there is a high level of trust and respect between each other and between them and the leader. So, a leader who belittles his/her team will likely have low productivity. Leaders who build a high level of trust, though, tend to have a more productive workforce.

The HBR study, though, took this to a much higher level. It explained WHY this coaching style works.

The “Good Workdays” most often included making progress in meaningful work. In contrast, “Bad Workdays” were those where the team members experienced setbacks. Keep in mind that the happiness of the team members wasn’t related to the success of a meaningful project — just progress. When people are moving toward a meaningful goal, they are happier than when they experience a setback. (Sounds like common sense, but it is a brilliant observation.)

A good example of this is the facemask controversy during the Covid-19 crisis. When business owners had to shut down their stores, that was a huge setback. Morale and happiness for all involved were dismal. Then, Phase 1 was implemented. Entrepreneurs opened their doors with an attitude of, “Thank God! This is finally starting to end.” Phase 2 was implemented and then Phase 3. Enthusiasm was really high. Then, out of the blue, a new facemask order was implemented. People who are anti-facemask are, most likely, not wanting the virus to spread more. In reality, they just see the order as a setback to “getting back to normal.”

How Managers Can Help Team Members Progress in their Meaningful Work.

The study also mentioned additional items that led to “progress” or “setbacks.” These are the things that came mostly from the leader of the group or the other members of the group. Items that were related to the project or the meaningful work itself were listed as either a “Catalyst” or an “Inhibitor.” A Catalyst would be any external thing that led to more progress on the project. An Inhibitor was any external thing that made the project harder. These would include adequate resources to do the job or support from other team members.

The final item that either led to happiness was “Nourishers” versus “Toxins.” Don’t let the complicated terms used by the researchers confuse you, though. It is actually really simple. Nourishers included praise or positive comments about the work of the team member. Toxins included anything negative aimed at the team member.

To make this whole thing really simple, if you want to motivate your team, you want to encourage positive things related to the meaningful work and the person. You also want to diminish the negative things that can lead to a setback for the project and the team member.

Examples of How to Keep People Motivated in a “Normal” Time.

If your team thinks that the work that they do is insignificant, morale will always be a challenge. For instance, when I was in high school, I worked at a fast-food restaurant. Serving fried-chicken seemed pretty insignificant. However, the store that I worked in had scored 100% on the last five “secret shopper” visits. Our boss told us that we had tied the longest-running 100% results in the region. If we scored just one more, we would break the record. He worked out a trade with the movie theater in the mall to reward the entire team with a movie-night if we broke the record.

When the boss pinned the 100% secret-shopper report to the bulletin board, the whole crew applauded. He had turned a typically mundane activity into a team building event.

The key to making work significant is to do two things. First, you have to establish mile markers along the way. Second, you as the leader have to encourage the sharing of success stories within the group. (Yes, it is great when the boss praises an individual, but when coworkers do it spontaneously, the praise is magic.) Sometimes it is as simple as saying, “I’m glad you told me about that. Would you mind sharing that with the group at the next staff meeting?”

How Do You Motivate Your Team During a Time of Change or Crisis?

The opposite of everything we just covered is true as well. Making progress in a project, solving a tough challenge, or completing a difficult task can add to a team member’s satisfaction. However, experiencing a setback can be demoralizing. It often takes more positives to overcome even a single negative.

“Negative events generally have a greater effect on people’s emotions, perceptions, and motivation than positive ones, and nothing is more demotivating than a setback—the most prominent type of event on knowledge workers’ worst days.”

So, what happens when a series of negative setbacks are strung together? Keeping morale up can be more challenging.

Luckily (or unluckily depending on how you view it,) difficult challenges are plentiful during a crisis.

Necessity Is the Mother of Invention.

When Covid-19 first hit, we started noticing that a few of our clients who had meetings coming up started postponing them. A couple of weeks later, they started canceling. It was a huge challenge for a company that specializes in making meetings more fun and in-person training classes.

One of these clients who had to cancel her program asked us if there was any way to do a team activity virtually. I got my entire team together on a Zoom call. “For the most part, Zoom calls are really boring and really one-sided. How can we make a Zoom call with over 100 people be fun and interactive?” On the team, I had experts with many different backgrounds. One was a technology expert. Another was an expert at improvisational comedy. About half were professional speakers.

We started the process by looking at programs that we already had that might most easily lend themselves to a virtual delivery. We settled on trying to adapt our team escape room. It took a few weeks to perfect the process but when we finished the first Virtual Escape Room, we got overwhelmingly positive feedback. I remember saying to one of my instructors, “Man, I may never leave my office again.”

Morale shot through the roof. We all knew that we were a part of something really special. What made the process so inspiring was that each person on the team felt like they were instrumental in the success because they were!

Follow These Steps to Motivate Your Team During a Crisis.

When your team members get discouraged, you as the leader have a powerful role in helping them stay focused. Sometimes it is just a simple positive affirmation like, “I know what you are required to do is hard, but I know you will figure it out.” However, when morale is low and stress is high, every day without a positive interaction with the leader has the potential to lead to a “Bad Workday.”

Break your big goals and projects into bite-sized pieces. As the team accomplishes these mini-goals, praise them. If a marathon only had a start and a finish, most people would quit very quickly. Mile-markers are important to morale.

I did a virtual meeting for a team a couple of days ago for a client who wanted to improve team communication. One of the team members was using a laptop so old that it didn’t have a camera or an internal microphone. How on Earth can you expect your team to function in a post-Covid world without the proper tools?

Anticipate how your current plans can run off the rails and have a Plan B or a Plan C. (Heck in 2020, you might want to have a Plan D, E, F, and G as well… Just in case.)

Realize that your team will be deflated by things that are outside of your control. You as the leader can motivate your team by showing how even the negative things that happen can be either a learning experience or an opportunity for growth.