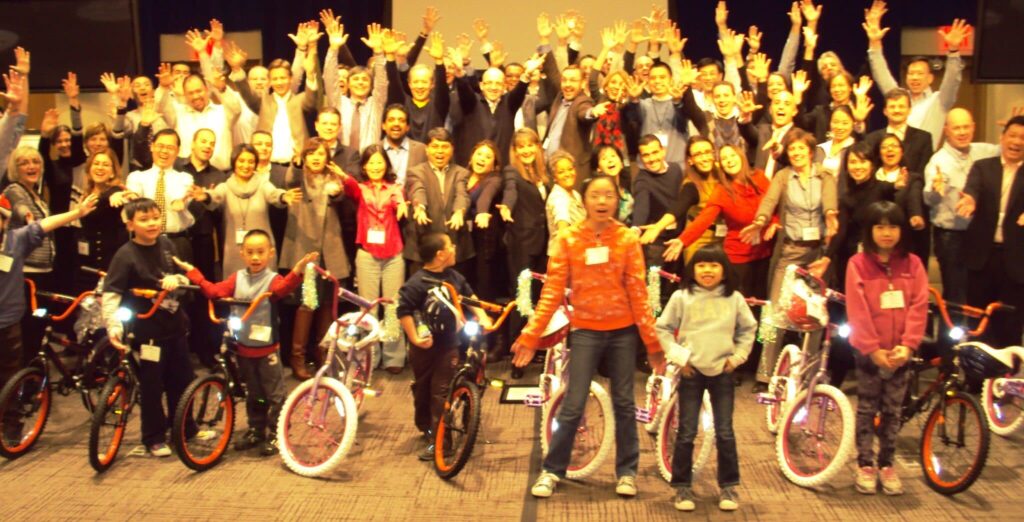 Over 60 people from around the globe came together in New York City for a Build-A-Bike Team Building Event®. These Pfizer employees from the Emerging Markets Group in New York, NY enjoyed the fun, laughter, and learning as they built 10 bikes that were presented to children form the Salvation Army’s Chinatown operation.

It was a fast-paced hour with 10 teams working together to solve problems, answer questions, and figure out clues to garner the parts to build the bicycles and then complete the construction. With several countries from around the world, there were some language and communication barriers, but everything was solved and the task completed in the allotted time. From Europe, Asia, the US, and from the land down under, the participants worked together to have a great time and learn some valuable team building and leadership skills.

Teamwork is often viewed as the simple interconnection and effectiveness of group members. But this event showed how people from many different countries can come together to make one event a big success and contribute to the needs of people in the community.

Although the participants represented many countries, the real difference was the experience they shared. It was learning (even if by accident) a little about teamwork and leadership, it was giving back, it was hearing the representative from the Salvation Army; helping families in the local community. Pfizer is concerned about improving the world through its oncology work and the emerging markets. Their work makes a difference every day for people throughout the world. But the Build-A-Bike Team Building Event ® was a nice reminder that making a difference really does make a difference.

If you want information about how your team can organize a “charity team bicycle build” click this link. For a list of all of the team building events and activities in New York, click here.